This summer witnessed the stunning creation of the UK’s largest street art mural. Located between King John Court and New Inn Yard, even colourful Shoreditch has seen nothing like it. This huge mural is made up of a myriad of different images and artistic styles with each section being a unique interpretation of a single theme: connectivity.

This seems a suitable theme for a piece in the heart of London’s Silicon Roundabout, the third largest tech cluster in the world. This theme was agreed upon by the building’s owner, the communications company, Colt. 250 litres of black paint and over 500 spray cans later, Colt’s brutalist HQ has been transformed. More than 1,400 square metres of concrete transformed into a concept piece.

Global Street Art’s Lee Bofin explains how they split the wall into eight sections. He states that “each section was painted directly by a pair of artists so they connected directly together”. In six months, Global Street Art careful assembled each stunning design into one enormous piece.

The mural is truly stunning when viewed as a whole, but it’s only when broken down into its respective segments that the creativity and technical skill of each pair comes to light. The attention to detail in each individual design is incredible - read on for an Insider breakdown of the UK’s largest street art mural! 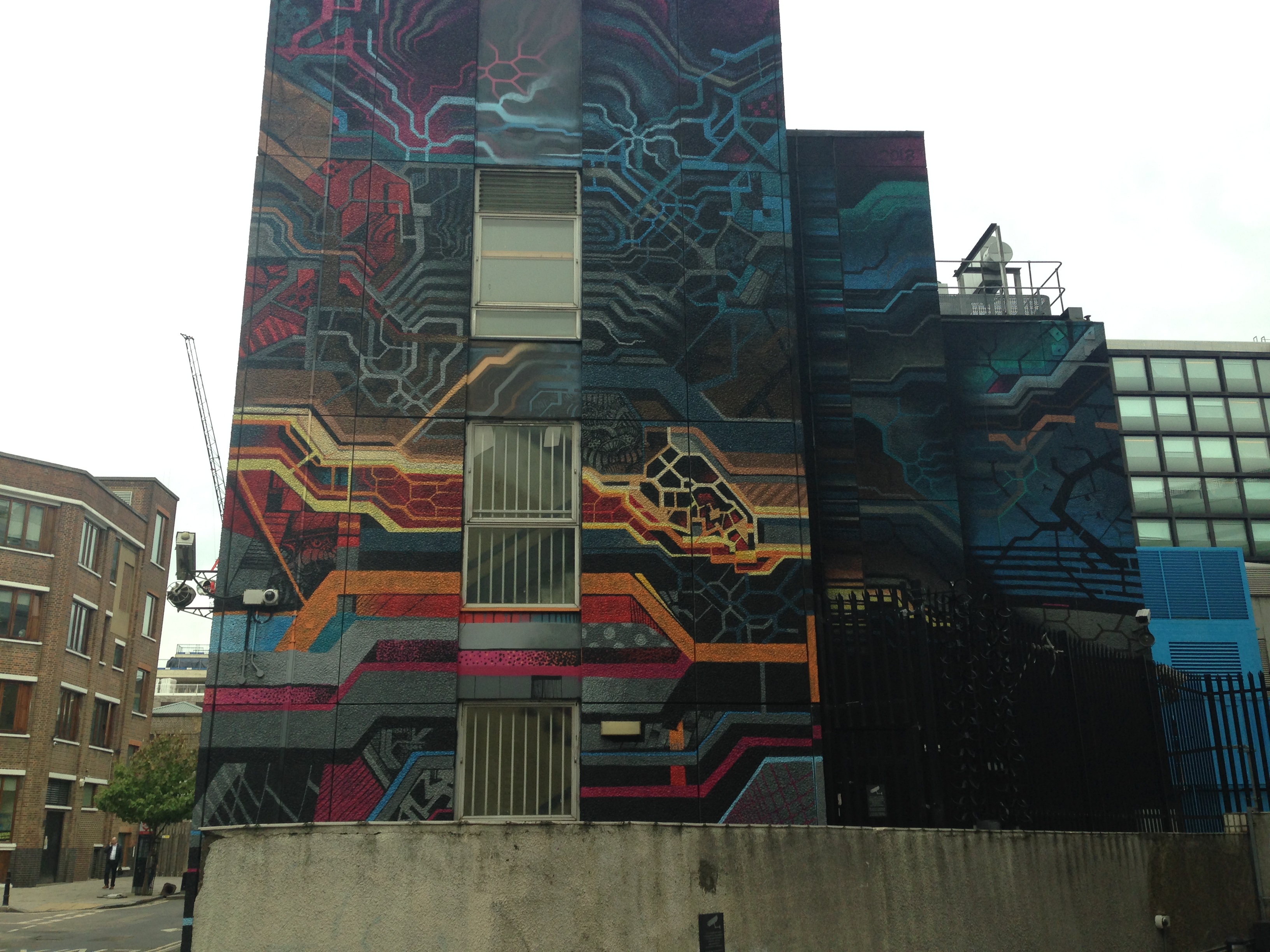 1) AutOne & Neist are the first duo on New Inn Court and have an excellent position, easily spottable from the main road. They provide a fresh new take on the brief with their colourful abstraction inspired by transport maps, specifically citing London Underground’s own.

2) Lovepusher and Mr Cenz’s “Future” is nothing other than stunning. Mr Cenz is known for his colourful faces all over London but this collaboration blends seamlessly into the electrified sky of the next piece. A sci-fi style crystal balls shows the modern figure with connectivity literally in the palm of her hand. 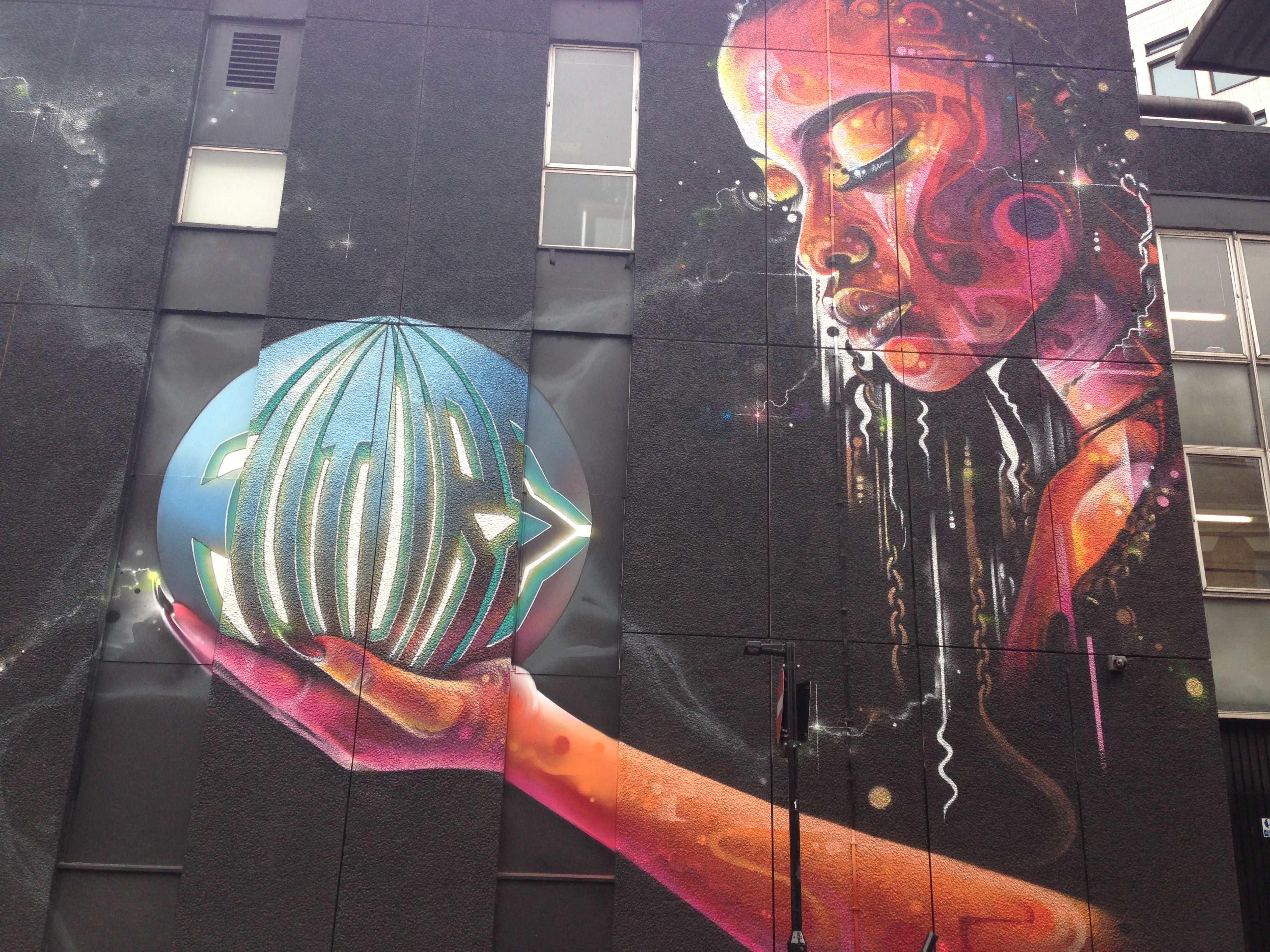 3) Nomad Clan, a Manchurian duo mix futuristic outlines with intensely symbolic imagery: a looming hand and an ethereal dove. On inspection the retro “rewind” and “fast-forward” signs can be made out in a nod to technological connectivity of the recent past.

4) Ninth Seal and Best Ever take advantage of the natural shape of the building before we turn the corner. The more abstract multi-coloured shapes in some way contrast to the realistic depiction of the human handshake, the classic joining symbol

5) Busk and Mr Switch go medieval with a striking vanitas piece. The fossilised ammonite shell provides the temporal connection through the ages, as an ancient object. Peer close enough and you can spot the artists tags hidden in light cast by the candle flame. One blogger also suggests a possible connection to the logo of Amnesty International. 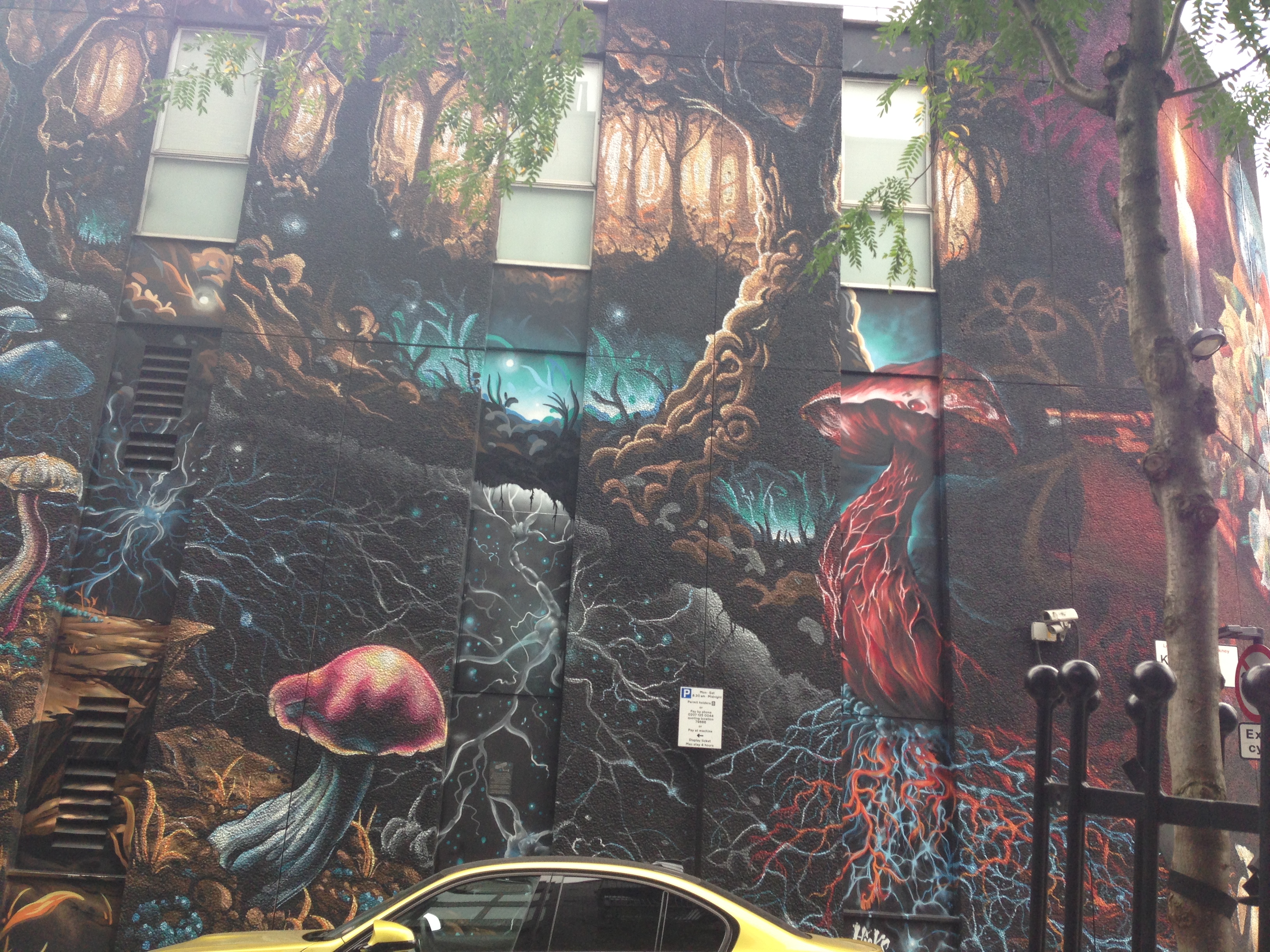 6) Ed Hicks and Dr Zodak are first up on King John Court and have created the intricate Mycelium Network. This truly innovative take on the brief depicts the centrality of fungi, as an organic connector in the forest eco-system. This forest blends into the wooden dance floor of the next piece. For those with a careful eye you may also be able to spot the funky hip-hop character hidden in the bark of a tree.

7) Captain Kris and Tizer take prime of place with their funky bejewelled lady which can be seen slipping and sliding with a robot sporting a VR headset. This robotic dance duo works into the cartoon-style pipes of the final design.

8) Hunto & Mr Toms, both Italian artists, are the final pair with their quirky cartoon pipes said to demonstrate the relationship between machines and objects. This flows round the corner into a Picasso-esque piece with an orb of cubist creations locked into an angular embrace.

To discover the East End’s most colourful pieces as well as the debates and controversies of London’s ever-changing scene, join us for a Street Art Tour