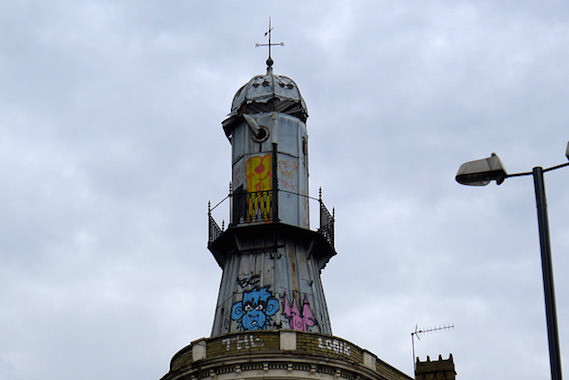 These days the lighthouse has become an advert for street artists, rather than the oyster bar it was purported to have advertised in Victorian times. Image Credit: Urban 75

If someone were to tell you that in the heart of Kings Cross sits a lighthouse, you’d probably think their head was lost at sea! But unbeknownst to many Londoners is that there actually IS a lighthouse, sitting in quiet dereliction opposite Kings Cross St Pancras Station Square. Gracing the top of an otherwise ordinary Victorian building is a charming lighthouse style turret, making it one of the more enigmatic local landmarks. Having lain derelict for over 20 years, it is invisible to most as simply yet another run down building. Understandable while traversing 6 lanes of traffic to catch the delayed 18:05 back to Southend! 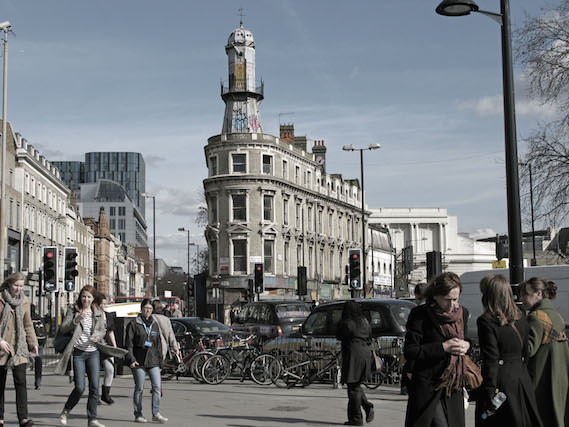 The building occupies an important road junction between Gray’s Inn Road, Pentonville Road, York Way and Euston Road, giving it a Flatiron type presence on the intersection. Despite the prominent location, many tend to miss the lighthouse because it gives nothing away about its own history. Even the blue plaque on the ground level must be hands down the most indecisive blue plaque in London, throwing up more questions than answers, reading, “Oysters were once sold here…or was that a fairground?” It shows that there are many stories about the lighthouse’s construction and use throughout its history, but that none can be verified and many are tall tales. Other guesses for its original use include a helter skelter, clock tower and even a camera obscura. 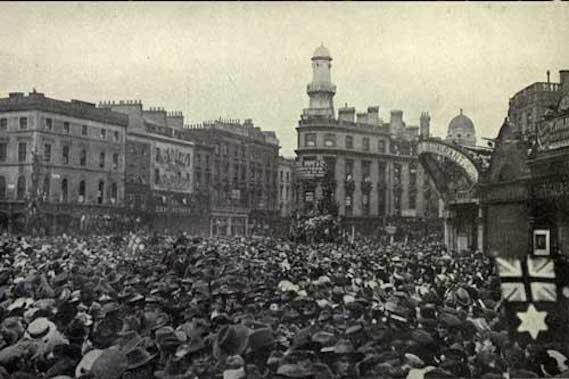 Crowds throng the area around the Lighthouse in what were better days for the building. Image Credit: Kingston Aviation

The most enduring and “official” view is that the lighthouse was built to promote Netten’s oyster bar, which occupied the ground floor. Oysters were a type of Victorian fast food, a sort of McDonalds of their day. Perhaps it was nothing more than an urban folly, serving no purposeful function other than ornamentation? Like all the other stories this one is no more reputable and is often thought to be unlikely. What is likely however is that no one will ever know its past function. Apart from why it was built, no one actually knows when it was built. A quick search on the Internet brings up references mostly to 1884, but 1875 is often mentioned as well.

Once home to  lively parade of shops, including the legendary Mole Jazz record store, the shops have been closed for many years now. As the Kings Cross Regeneration continues it is only ever more inevitable that further buildings will be affected. The building has once again become invisible, this time due to the white sheets engulfing the edifice as it undergoes a long overdue refurbishment by UK Real Estates. The work will see the interiors gutted and a five storey building with a mansard roof built behind retained facades.

Its use remains a mystery. But for whatever reason it came to be, it is now being given a new lease of life and a chance to create a new future. Unfortunately, its complex traffic island site means that we are more likely to see a supermarket open rather than anything truly interesting like ahem, an oyster bar. But a newly rejuvenated turret should gives enough reason to look up and pay attention once more.