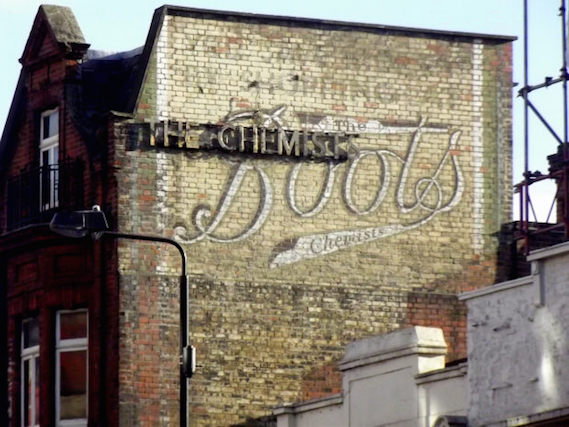 What are ghost signs?

Ghost signs, also known as fading ads are the faded signs and advertisements visible on the bare sides of brick walls dotted around London. From the Bovril sign in Brixton to the Hovis sign in Haringey, the old hand-painted signs are the remnants of our advertising past. The memory and interest of such signs today are linked to craft and early advertising history and, despite all the profound changes in society over the decades, have endured and survived against the odds, carrying many stories with them.

Ghost signs can be found all over the UK, France, Australia, the US and other countries worldwide. They are often kept because of their nostalgic feel or simply indifference by the owner of the building. Many old painted advertisements are occasionally discovered upon demolition of later built adjoining structures. The signs faded out (pun intended) of usage as newer and less durable forms of advertising appeared in the later 20th century.

How were they produced? 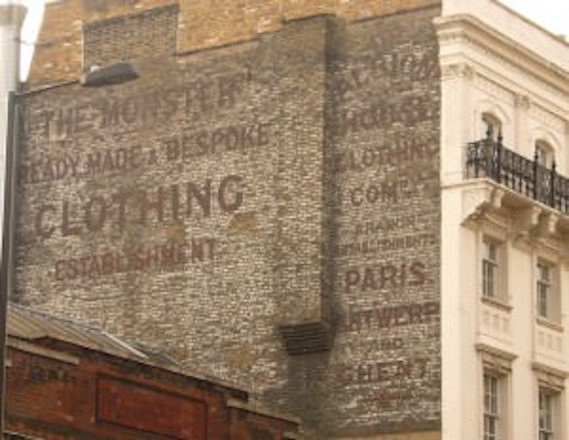 In the US the skilled craftsmen who hand painted the signs were known as signwriters or ‘walldogs’ in some parts of the country. Ghost signs were originally painted using oil based house paints. The signs that have survived most likely used paint containing lead, which is better suited to adhere to masonry surfaces.

There were many different techniques employed to paint ghost signs. Many smaller signs were simply painted freehand, using the mortar lines in brick to measure the height of the letters.

A spiked wheel was another method to perforate the lines of a design into a sheet of paper. This was then placed on the wall and patted with charcoal or chalk dust to leave an outline to be painted over later. Depending on the skill of the signwriter, many signs included illustrations and other decorative flourishes.

What did they advertise? 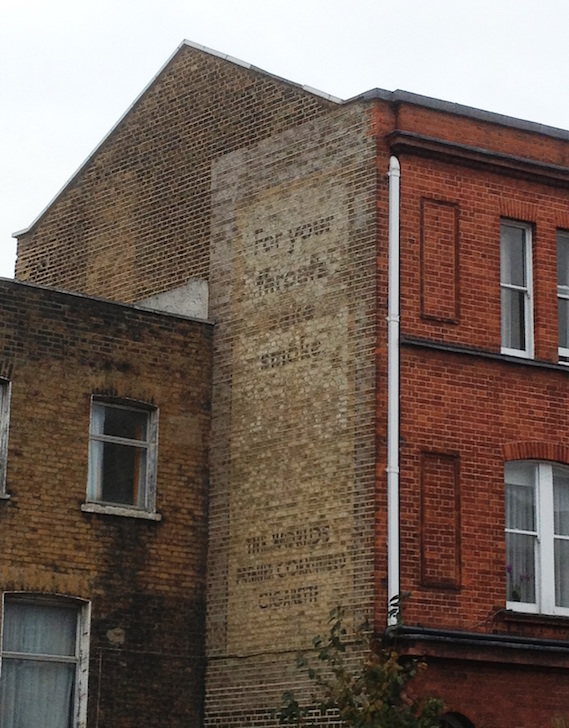 God knows what was in those cigarettes that made them so good for our throats, maybe they knew something we don’t now?   Image Credit: Kennington Run Off

Ghost signs advertised various products and services. All types of businesses used walls of varying sizes to publicise themselves. This varied from small local business having a sign painted on their premises, all the way up to big brands such as Gillette and Hovis who paid for signs across the UK. There are many instances of signs outliving the company or product advertised.

The signs also provide an interesting snapshot of attitudes in society in that particular era. Take the above example found in Kennington of a cigarette brand. It was clearly painted eons before health warnings were introduced onto cigarette packets, in the days where every movie star and celebrity had a fag hanging out their mouth. How times change!

When were they painted?

Painting on walls supersedes hand-painted ghost signs by a wee couple of millennia, dating back to at least the Ancient Egyptians. While it is hard to accurately date these hand-painted signs, it is usually agreed that they had their heyday inbetween the later years of the 19th century and the first half of the 20th century.

Why did they die out?

In the post war years the economics of production moved in favour of mass-printed posters and billboards, leaving behind the slow and intricate hand-painted signs as an obselete relic of the past. Following this shift, it was unusual to find any hand printed signs. But signwriters still exist and find work today. Many signs are now repainted, preserved and given a new lease of life, or left as a faded reminder of the brands, signwriter’s handywork, and the public’s consumer habits in an exciting and burgeoning era of early advertising. (See our post on the art of signwriting here) 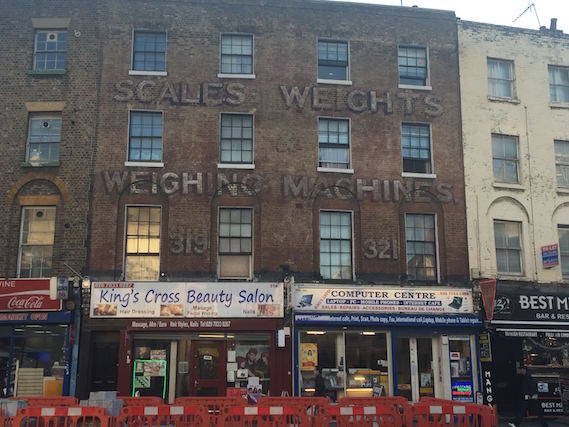 The façade of 319/321 Grays Inn Road has ghost signs advertising Scales, Weights & Weighing Machines – giving an insight into the former occupation of the building. 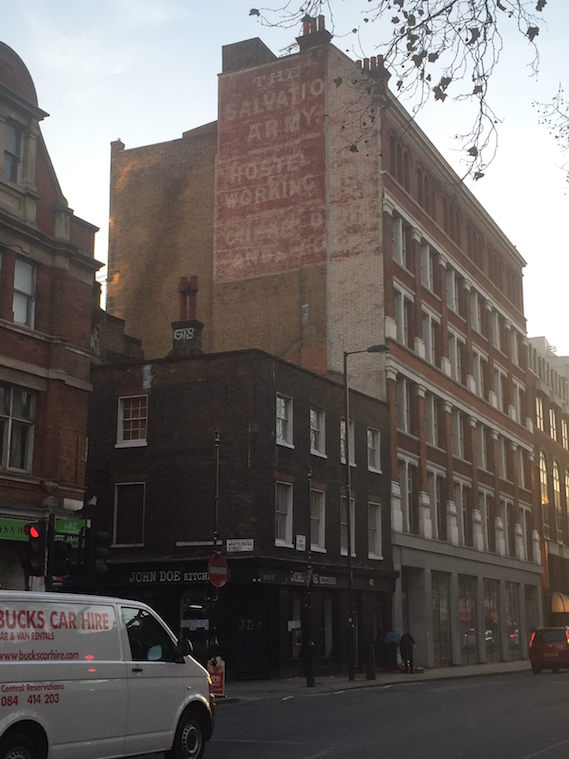 The Salvation Army ghost sign is one of the more impressive and imposing signs in the Silicon Roundabout area. Image Credit: Evan Parker

The large Salvation Army sign on the side of an imposing Old Street building hints to its past as housing for the homeless. The charity Shelter was based in the building, run by The Salvation Army. The charity, founded in 1865 by William and Catherine Booth moved to Old Street in 1890, taking control of a former brewery and converted it into a factory known as The Elevator. In exchange for a days work, the homeless would be entitled to a food ticket. 500 men worked there and many even lived there also.

The factory wound up its operations on moving to the newly opened Elevator III in Whitechapel in the late 1800s. The Salvation Army then built a hostel with accommodation for 450 people in 1900, which is when the ghost sign dates from. The sign reads ‘The Salvation Army, Hostel for Working Men, Cheap Beds and Food’. The hostel closed in 1969. 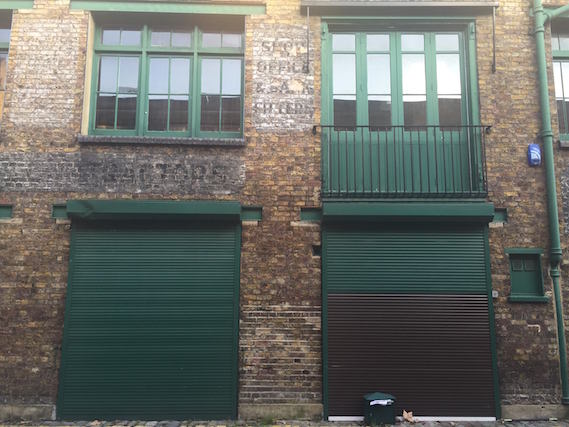 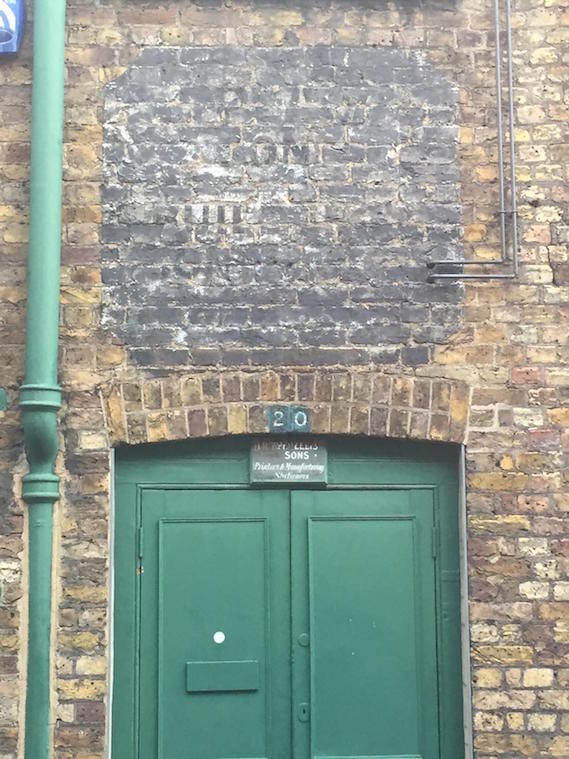 Like the company that once inhabited this mews building, the sign has faded into nothingness. Image Credit: Evan Parker

In this picturesque mews lies three faded ghost signs, with only one legible enough to be read. It reads ‘Shop, Office & Bank (?) Fitters’. The next reads contractors. The other two are too faded to read. 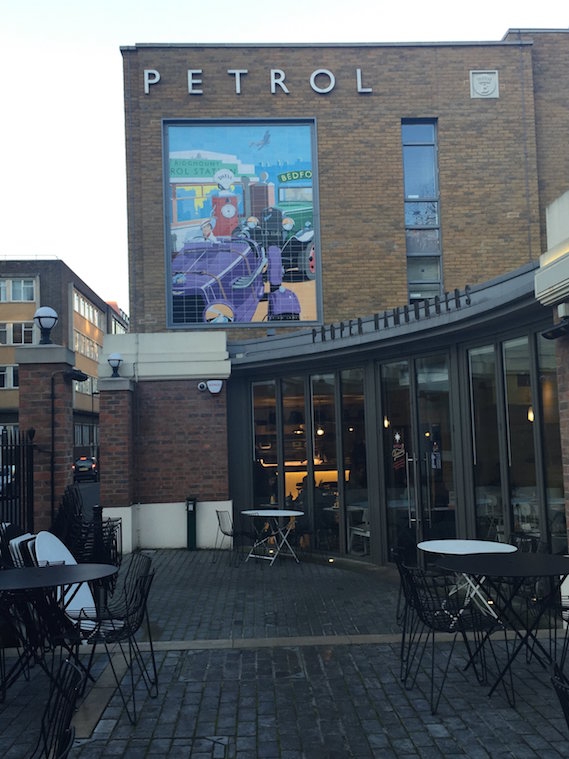 This sign has been repainted and preserved for future generations and hamburger lovers to enjoy! Image Credit: Evan Parker

The former petrol station, now a Byron Burger chain, at the corner of Store Street and Ridgemount Street in Bloomsbury is probably the best preserved sign in the area. The beautiful illustration and vibrant colours enhance the dining setting.