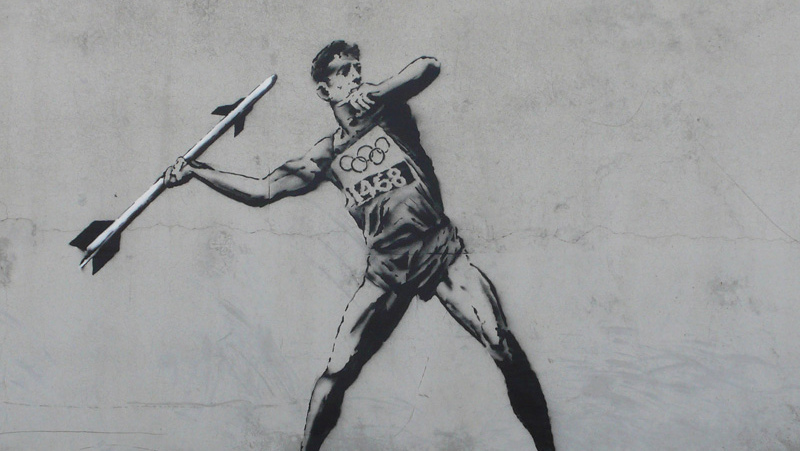 Picture of Banksy’s Javelin Thrower via Duncan Hull on Flickr

As Pyeonchang’s Winter Olympics draw to a close, we cast a look back to 2012 when the eyes of the world were glued to London Town. This was an exciting time of urban regeneration projects, green initiatives and a huge cultural and artistic programme. The finest artists in the land were invited to design Olympic posters “identifiable with their own style” as organisers seemed to embrace the colourful and diverse London art scene. Street artist, Darren Cullen, of Graffiti-Kings fame was even commissioned to re-vamp the black cab as an Olympic special edition. In an age where Britain’s “Greatest Living Artist” is none other than Banksy himself, things were looking good for alternative art forms!

Over in Shoreditch, the authorities themselves were getting in on the action with the mayor of London’s “Summer Like No Other” programme commissioning twelve sculptural marvels.. Shot-puts landed, javelins were thrown, and bow and arrows of gigantic proportion aimed to fire across the capital. By the Truman Brewery some of these can still be found shoulder-to-shoulder with street art classics.

Shoreditch favourites like the Australian artist Jimmy C unveiled a stunning portrait of Olympic runner Usain Bolt and stated “I love London, and I see this as an amazing and positive time for the city,” Nevertheless he confessed himself taken aback, and he wasn’t the only one… 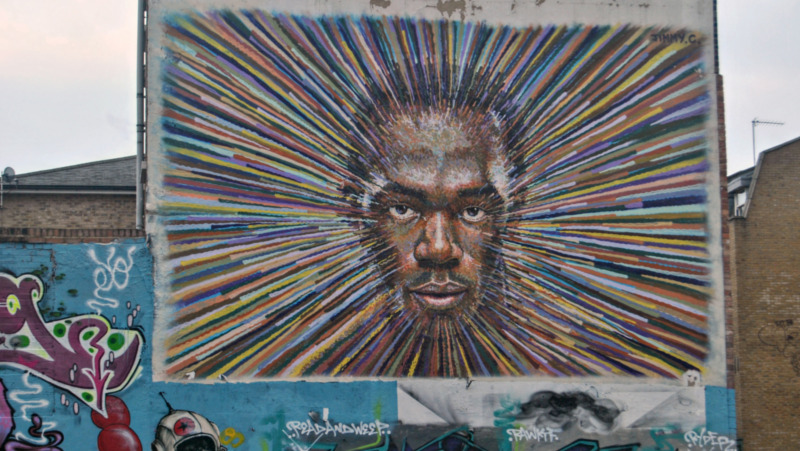 Jimmy C (whose real name is James Cochran) sought careful permission for his artwork, but was nevertheless confronted with an “authoritarian” style Olympic Committee who warned him to steer clear of the famous five rings due to strict copyright. Artist Mau Mau also sought permission from the building owner for his Olympic special, but had breached the five-ring ban with his subversive satire. He believes that the reason his work was whitewashed by the council was because it had upset the Games’ official sponsors..

In true street art style however, Hackney’s finest continued to produce subversive pieces in response to restrictions and cherry-picking the politically neutral of the East End. Nevertheless even the iconic and the seemingly apolitical were not safe, with local classics like Roa’s Crane on Hanbury Street covered up with an Olympic banner. This was the final straw for residents who deplored the covering up of a “selfless gift, given to the residents of East London” with a petition. This successful campaign to uncover the majestic bird gained hundreds of signatures merely within the first few hours.

However, a far more sinister milestone arrived with the arrest of Darren Cullen, the official Street Artist of the Olympics himself. He was one of several artists whose homes were raided as they were rounded up in a pre-emptive strike by the Metropolitan police. The artists were arrested on suspicion of “incitement to commit criminal damage”. As reported by the BBC, the bail conditions of Cullen prevented him from entering any railway system, including the Tube and trams as well as from entering within one mile of any Olympic venue. He was also forbidden from possessing any spray paint, or associating or communicating with the other persons arrested in the investigation until November. Cullen maintains that he has never painted illegally in his life, so the arrests were a serious blow.

To conclude: How can we make sense of this confusing series of events? How can we explain why art is simultaneously commissioned and covered up for one event? Why did the Olympics commission Darren Cullen yet provoke his arrest? It seems, despite the rising profile of street art, the Olympics provide us with a more nuanced account of its status twenty-first century Britain. We are seemingly no closer to defining what constitutes street art, and what constitutes an anti-social crime.

Explore the lively debates of the London Street Art scene as well as countless beautiful pieces on our Shoreditch Street Art Tour!

Click here for street art reactions to the 2012 Olympics.