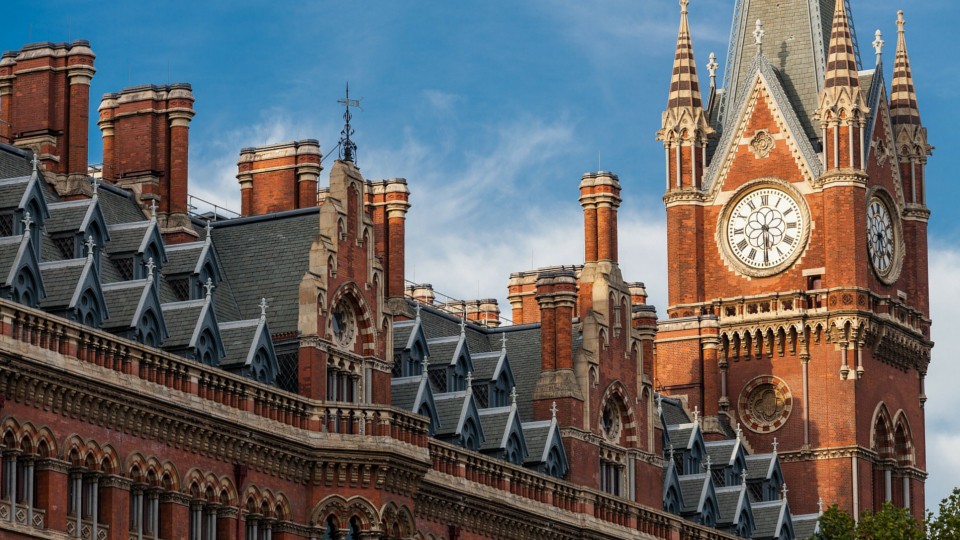 The iconic St Pancras Renaissance Hotel towers over the surrounding area. Its luxurious facade is not only famous since its appearance as King’s Cross in Harry Potter: Behind it lies a rich history, a history which parallels the history of King’s Cross itself. We have traced the history of this mysterious palace to reveal the story of an area transformed. From Victorian London to the twenty-first century, the building first named the Midland Grand hotel, stood right at the heart of the King’s Cross evolution.

By the mid-nineteenth century, the Victorian railway craze had brought seven main railway termini to London (Bishopsgate, Fenchurch Street, London Bridge, Waterloo, Paddington, Euston, and King’s Cross by 1854). This explosion in modern travel exhausted traditional lodging options. The epoch’s star architects hence arrived on the scene, commissioned by the jostling rival rail companies. Each company wanted the show-stopping railway hotel. Luxury now surrounded the capital, from the Landmark Hotel in Marylebone to the Grosvenor Hotel in Victoria. Although, King’s Cross in 1873 saw perhaps the most extravagant of them all – the Midland Grand Hotel.

The Midland Grand Hotel was inextricably intertwined with St. Pancras station. This, in itself, wasn’t just a transportation hub for people, but also for goods. Unlike the neighbouring King’s Cross Station, the railway tracks running into St. Pancras were elevated, going over the Regent’s Canal instead of under it. This enabled architects to include a large amount of storage space, just below the railway tracks, making it ideal for freight traffic. In 1862, nearly 18% of London’s coal consumption was brought in via St. Pancras, as well as at least three daily beer trains! This is one factor which made the Hotel a prime location for merchants, and made the neighbourhood a prosperous business area.

These merchants were not just treated to convenience but to astonishing beauty. The super-star architect called upon to design the establishment was none other than George Gilbert Scott accompanied by the engineer, William Henry Barlow. Scott is credited as the most prominent figure in the revival of gothic architecture, a term once used as an insult. With its glamourous exterior this neo-gothic palace cannot fail to impress. The pointed windows and cusped arches evoke the striking beauty of a cathedral. No expense was spared to make the interior equally stunning, with lush lounges, impressive staircases and gothic arcades. The single-span roof on the inside was at one time the largest in the world.

However, the grand hotel’s decline came with the two World Wars. WWI crippled goods transportation and the ownership of St Pancras changed. The new owners had little interest in the Hotel and turned it into offices in 1935. WWII intensified the changes and damage to the area, with road transportation giving the once flourishing transportation hub a final blow.

The once beautiful Hotel fell into decline, used only by squatters who inhabited its rooms for quite some time. King’s Cross in general had become quite the shady suburb. In 1966, British Rail proposed the demolition of the Hotel. The following public response luckily led to the proposal being quashed, and the Hotel became Grade I listed. It wouldn’t be until the end of the century though, that the hotel would be revived.

With the decision to regenerate the area, and to set up a high-speed train route to Paris, new life came to the Hotel. Just like many other buildings around it, developers looked at how use them in a modern way while keeping the character and heritage. The nearby German Gymnasium became a restaurant, old gas holders were set to become apartment buildings, the old coal drop should become a retail shopping space, and the hotel…? Well, the hotel was extensively refurbished, and was reborn as the St. Pancras Renaissance London Hotel, with 244 bedrooms, 2 restaurants, 2 bars, a health and leisure centre, a ballroom, and 20 meeting and function rooms. It opened its doors to the public only in 2011. What’s more, the windows now boast views of the Eurostar’s high speed tracks, as well as the cascading glass of King’s Cross Station istelf. In this way, modern artistry is now blended with the neo-gothic.

All in all, we think the Grand Midland Hotel is a beautiful representation of the rollercoaster that is the King’s Cross area’s life: Born out of a wave of innovation in transportation and strong business, and created with the old masters in mind.Then neglected and in decline, only to rise anew, bringing new business, artistic heritage and transport together in one impressive and significant project.