We have become used to seeing skyscrapers in our cities, and thanks to the TV, even those of us that have never visited the States are familiar with the New York Skyline.

However, London did not embrace the skyscraper as readily as its American neighbours. New York began the construction of tall buildings from as early as 1846 and many of its famous buildings, like the Woolworth building and the Bank of Manhattan were constructed between 1900 and 1930.

When Charles Dickens took one of famous walks around the city of London, the only tall building he would have seen, was St Paul’s Cathedral at 111 metres high. It remained the city’s tallest building until 1963 when the city’s first skyscraper, Millbank Tower was built.

Three years later, the London skyline was altered again when in 1966 the Centre Point building was constructed in New Oxford Street. It was built to be a functional office block and many people regarded the building as ‘ugly.’  At a height of 117 metres, it wasn’t a skyscraper in the American sense, but along with Millbank, it was one of the tallest buildings that London had.

The first American-style skyscraper didn’t make an appearance until 1980 when the Natwest Tower was built. Now known as Tower 42, it is 235 meters tall and it held its crown as London’s tallest building for ten years. However, design came ahead of functionality, because in fact the bank was unable to move all of its operations into the new building; due to the fact that the design greatly reduced the available floor space. Anyone who was in London during the Olympic Games or the Paralympics will have seen the three Olympic rings lighting up the London sky from the building, as a result of a new lighting system that was installed in June 2012.

Since the construction of Tower 42, the design of skyscrapers has changed dramatically. The use of sustainable materials, innovative use of light and space as well as functionality both on the inside and the outside of new buildings, has changed the London skyline into an interesting hotchpotch of different shapes and designs.

New buildings in the pipeline include the now infamous ‘Walkie Talkie’ Tower, which became a PR nightmare recently, when the glare from the windows caused a park car to start to melt and has now been renamed  ‘Walkie Scorchie.’

Another new building designed by London architects MAKE has just got the go ahead. It is definitely a nod to the dramatic New York skyline, having been inspired by the gothic architecture in the films Batman and The Dark Knight. The building will be in the centre of the city’s Insurance Industry, in Leadenhall Street and it is to consist of layered storeys – the tallest reaching 170 metres tall, which will make it London’s 13th tallest building. Work is due to begin in 2015 and should it should be finished by 2019.

MAKE are the architects responsible for the London Octopus on Chiswick Roundabout which is a 50 metre tall, irregular shaped building, covered in a shroud which houses 2,650 square metres of LED lighting.

It is not only a functional workspace on the inside, but, thanks to the LED’s, it is a giant advertising hording on the outside. Like an octopus, the building reaches out in different directions and encompassing a vast viewing area. Its position on the Chiswick Roundabout, which is where the M4 starts and the North Circular, South Circular and, the Great West Road converge; means that this building is on one of the major routes in and out of London and has a huge volume of traffic every day. A marketing paradise.

One wonders whether Charles Dickens, who loved to walk through London’s streets, would like the high rise glass and steel framed buildings of today; maybe one day they’ll build a time machine and then we can ask him. 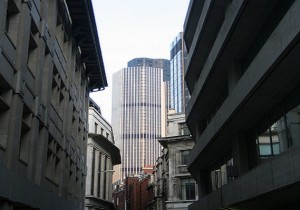