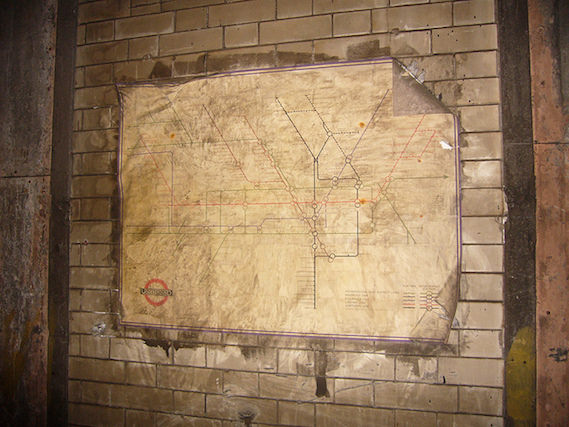 Greater London has hundreds of stations within its borders, and sometimes it isn’t possible to keep them all. Over its modern history, more stations have closed than we have space to include and detail here, but some are of more note than others and we’ve picked out ten of the most interesting.

Railway Stations close for many reasons, such as wartime economies, which in World War I saw dozens of Inner London stations close for good, or war itself, with WWII bomb damage being a factor in many a station’s closure. Some were simply replaced with modern and efficient systems, signalling a change in fortunes, such as many stations now on the DLR, or the East London Line.

Many were unable to expand and adapt to modern requirements and were simply resited or replaced with stations nearby. Unfortunately many closed unnecessarily to save money after the Beeching Railway Cuts and reductions in the ’60s and ’70s. For some, the people simply stopped coming. Many closed stations have no remnants left over, while others exist as ghost stations, most typically Tube stations, which quietly rot away underground. Some areas have been massive losers, with many of their stations closing. Camberwell, Shoreditch, Battersea, Bermondsey and Old Kent Road saw most of their stations closed, leaving densely populated parts of inner London isolated, with steps still being taken today to make them better connected.

Meanwhile, proposals keep flooding in to turn abandoned Tube tunnels into cycleways, nightclubs and art galleries, while some, like Aldwych have been popular for filming since closing. New stations are proposed for many of these areas, such as Old Oak Common, near the sit of the closed St Quintin’s Park Station or the Bakerloo Line extension down Old Kent Road, which will see a resurgence in travel in areas that have lost so much. Anyway, here’s our list of London’s closed railway stations: 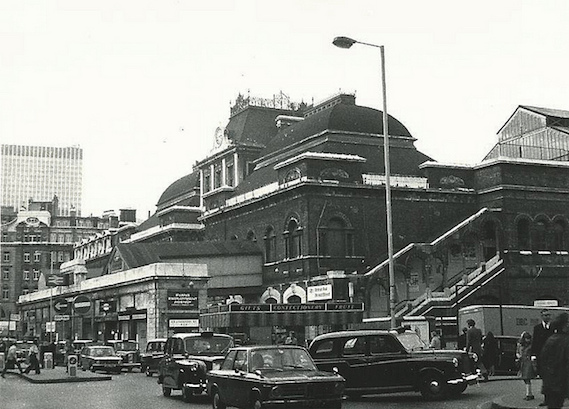 Adjacent to Liverpool Street station in the heart of The City of London, Broad Street Station was once one of Central London’s busiest railway termini. It opened in 1865 and by the beginning of the 20th century more than one train per minute was arriving or departing during rush hour, with over 27 million passenger journeys made in 1902.

However, in the early years of the 20th century the North London Line suffered a dramatic loss in passengers and revenue due to the expanding competition from bus, tram and underground networks. Passenger levels shrunk by 44% in just over 10 years. Its decline was precipitated through damage sustained in both World Wars, with the damage never fully repaired. Post war, services were withdrawn and it eventually closed in 1986, with passenger levels at an all time low of 6,000 per week. The site is now home to the Broadgate Centre office and shopping complex, with none of the former station remaining. 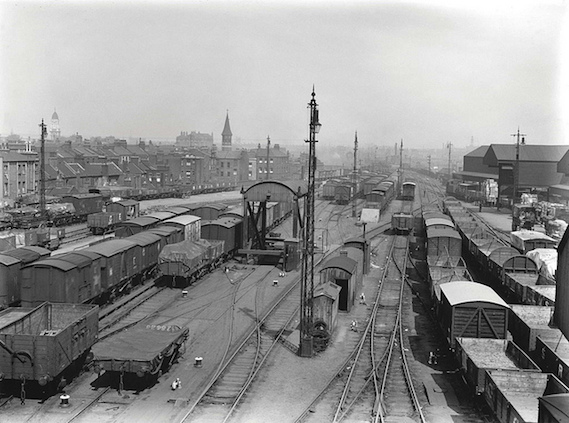 When Boxpark was just a twinkle in a developer’s eye. Image Credit: Mwbwls

Originally opened as Shoreditch Station in 1840 and renamed Bishopsgate Station in 1846, it was envisioned that it would eventually develop into a terminus on the edge of The City. Although in Shoreditch, it was named Bishopsgate after the main thoroughfare into The City of London, in an attempt to lure city commuters. A lack of space for expansion led the newly formed Great Eastern Railway company to open a new terminus at the current Liverpool Street site. The station was only in use as a passenger service from 1840-1875, after which it became a freight service. It was eventually turned into a goods station, with the façade and walls being removed.

It functioned as a goodsyard until it was destroyed by fire in 1964. The site remained derelict until demolished in 2003, with the exception of a number of grade II listed structures, including ornamental gates and the remainder of the 260 metre “Braithwaite Viaduct”, one of the oldest railway structures in the world. In 2o10, Shoreditch High Street Station opened on the site of the closed station, going full circle as bar being a terminus, it has fulfilled many of the aspirations of Bishopsgate Station, such as attracting City commuters and being part of Zone 1. Maybe The Victorians just needed to build a Boxpark and hey presto, the people would’ve come! The remainder of the derelict site will be developed as part of the Bishopsgate Goodsyard project. 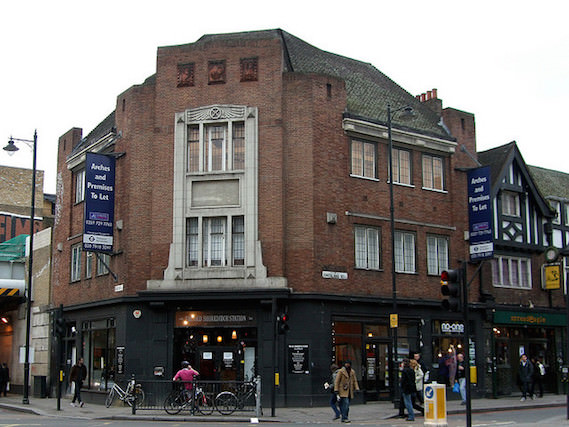 Shoreditch Railway Station was once part of the Great Eastern Railway. It operated as a passenger service from 1865 to 1940, where declining passenger numbers and ultimately wartime bomb damage led to its closure. The building, on the corner of the junction of Old Street and Kingsland Road was preserved, albeit with all remnants of the interiors stripped away. The platforms held out the longest, remaining intact until 2005, where they were demolished for the East London Line extension. The building now hosts The old Shoreditch Station Bar, which also functions as a café and exhibition space. 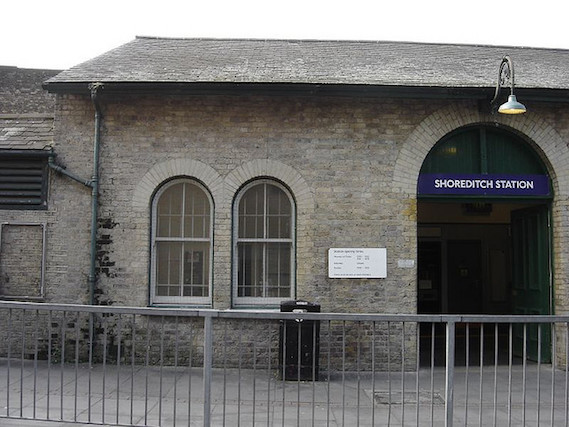 Shoreditch station, on the East London Line, closed in 2005, which left the entire borough of Hackney without a single Tube station. It was replaced by Shoreditch High Street Station, some 100 metres to the south east as part of the London Overground’s East London Line. The viaduct on the old section of the East London Line is now used as music venue The Village Underground.

Nine Elms Railway Station in the industrial riverside part of Battersea opened on 21st May 1838 as the London Terminus of the London & Southampton Railway. The neoclassical building was designed by Sir William Tite and was connected to Vauxhall and London bridge station by steam boat. It arrived two decades after the opening of Vauxhall Bridge (1816), which facilitated rapid development in the area.

This travel arrangement turned out to be awkward in the long run, as a lack of direct links to Central London and the opening of Waterloo Station (originally named Waterloo Bridge station) caused the station to become obsolete. The station closed to passengers on 11 July 1848, was damaged in 1941 during The Blitz and subsequently demolished in the 1960s. The site now houses part of the New Covent Garden Flower market. There are now plans afoot to open two new Tube stations on an extension of the Northern Line, as the vast swathes of industrial land are mooted to be transformed into a new residential area, finally bringing the area into Central London. 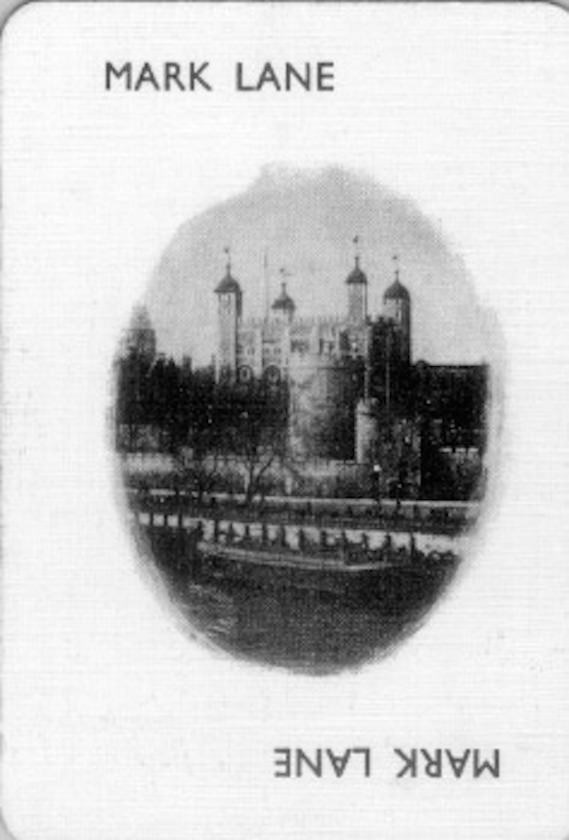 The Tower of London station closed in 1884, a mere two years after opening, after the merger of the Metropolitan Railway and District Railway into the Circle line, requiring a larger station. It was replaced by Mark Lane, named after the road it was situated on. It was renamed Tower Hill in 1946 and closed in 1967, due to increasing passenger numbers and little space for expansion, ironically relocating to its current site, on the site of  the original Tower of London station. 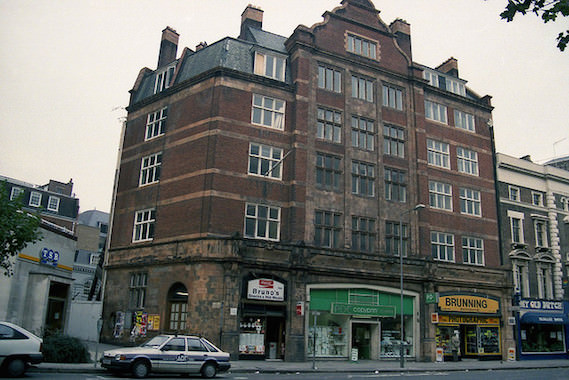 The British Museum had its own Tube Station. Image Credit: Tim@SW2008

If some areas or attractions often seem a tiny bit tucked away from the nearest tube station, then it’s possible that they might once have had their own little station. At one point The British Museum had its own tube station on the central line. Opening in 1900, the 1933 expansion of Holborn left the station obsolete and it permanently closed. In 1989, after being used as a military office and command post, the surface building was demolished and the rest of the station remains unused. Before you get all dewy eyed, realise that its closure ended the arduous task – well, for tube spoilt Londoners! – of having to leave the station and walk down the main road to another to interchange between the Central and Piccadilly lines. Nostalgic now? Thought not! 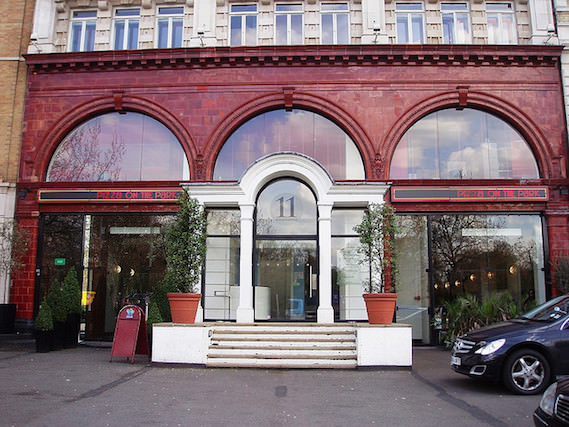 Ok, so Hyde Park Corner is still in use, but an entrance opposite Hyde Park was lost when it was converted into Pizza On The Park, after a new entrance was required with the conversion of its lifts to escalators. Luckily the restaurant retains the lovely oxblood tiles by architect Leslie Green…and the pizza looks alright too! 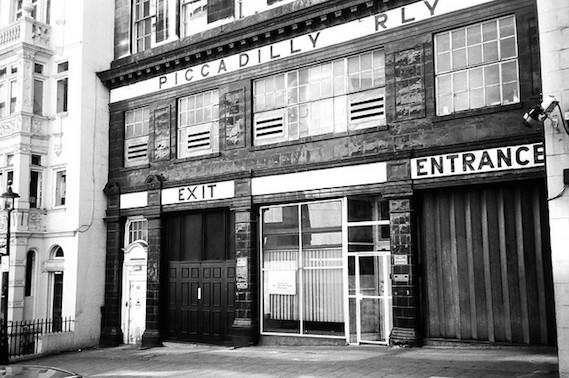 Aldwych opened in 1907 and was situated a short distance from Somerset House. It suffered from low passenger numbers and was the candidate for many unrealised extensions, including an early draft proposal for the Fleet Line, which became the Jubilee Line. It finally closed in 1994 when its lifts became uneconomical to fix. It is the film maker’s Tube station of choice for scenes requiring a tube entrance. Its entrance has featured in Patriot Games, The All Saint’s Honest and many pop videos. 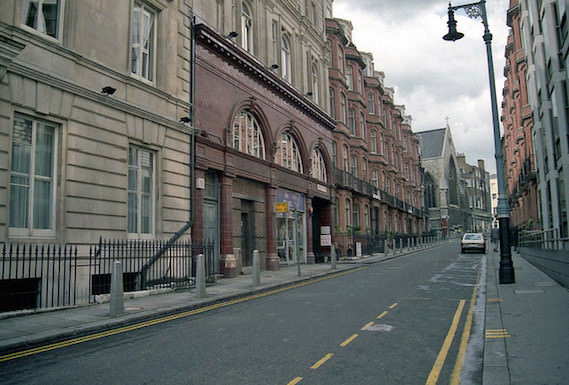 Opened in 1907 and closing in 1932, Down Street was never busy. It suffered from being too close to Hyde Park Corner and Dover Street (later renamed Green Park) stations. Located out of sight of Piccadilly in a residential area, it was often hard to find. As other stations expanded, with entrances and escalators close to Down Street, it was able to close. Although its life was short and uneventful, it played a key part in the war effort, used as headquarters for the Railway Executive Committee and the war cabinet of Winston Churchill.

Like this? Come and discover more on one of the Insider London Underground and Tube tours.