King’s Cross station’s new, bright and spacious concourse reflects the renewal of the wider area, heralding a renaissance in how railway stations interact with their urban context. The Victorians excelled at creating a sense of arrival, leaving a legacy of grand stations that took pride in railway travel. After a period of decline, London’s railway stations are beginning to scrub up to smart 21st century standards. 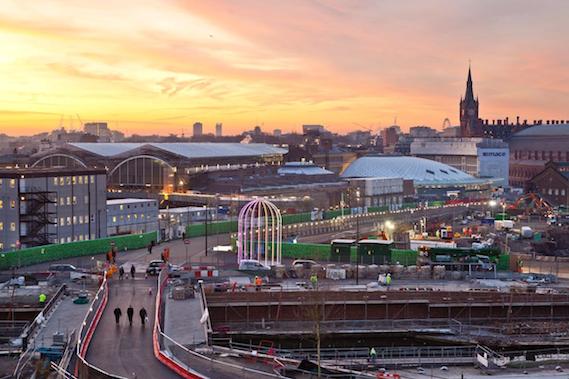 For over a century, the 1852 grade I listed façade of the King’s Cross Train Shed suffered the indignity of being covered by a hotchpotch of buildings, including a ‘temporary’ concourse, extant for 40 years. The new concourse is a sweeping semi-circular building that sits behind the station, giving the iconic façade space to breathe for the first time in 150 years and allowing the construction of a new public square. The concourse curves to follow the street pattern, leading the eye to the newly constructed King’s Boulevard and Granary Square, an area once dominated by railways and goods yards, now the heart of the multi billion pound Kings Cross regeneration. Inside, the vast metal concourse roof is ingrained in British architectural tradition, juxtaposed against the London yellow stock brick of the train shed. Even Harry Potter has a home, albeit not quite platform 9 and 3 quarters!

This is potentially the last great London train station for a generation. The largest transport infrastructure project at present is Crossrail, a £14.8bn rail scheme connecting the capital from west to east. For a project of this size however, the station designs are slightly underwhelming. Such were the concerns that a design review was ordered for all 27 stations in February of this year. Crossrail provides a once in a generation chance to regenerate London on a great scale. Visit any Crossrail construction site and you get a sense of the depth of work underway, gigantic holes in the ground dotted all over London.

Crossrail stations will bring immense improvements to their surrounding areas, but for all the demolitions and disruptions, none attempt to redefine their locale like Kings Cross does. Big opportunities are being missed to benefit Londoners and visitors alike. With Tottenham Court Road Station predicted to be as busy as Heathrow airport, St Giles Circus could be made into the new Piccadilly Circus, but – at present – there are a lack of landmark schemes surrounding the project.

In recent decades, it is Canary Wharf that has the most striking and successful station design, like a giant shark docked in a basin amongst a sea of towerblocks. The station’s elegant, semi open-air timber lattice roof will host a roof garden and shopping centre. Canary Wharf is one of several memorable stations on the Jubilee line, built in the 1990 boom era. How times change. Crossrail bosses are charged with keeping within a strict austerity-era budget. 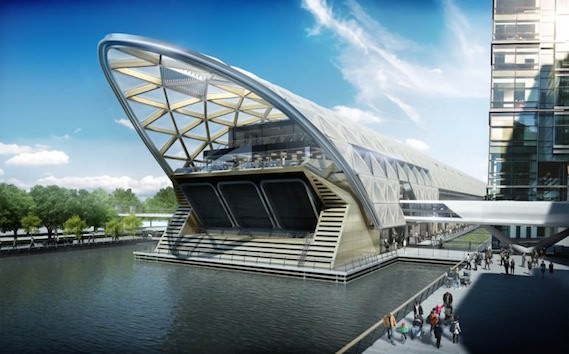 But cutting costs short changes this project, and omits what people expect from stations in contemporary times. With high rail fares, people expect more than just to travel from A to B. The enviable location of King’s Cross, its role as a transport hub and rich industrial history has transformed it from a place to resolutely avoid to a meeting place to see art, to dine, to drink, to study and to live. With the station knitted into the urban fabric, King’s Cross is once again imbued with a grand sense of arrival, a station for the 21st century.

How do you see railway stations? Do you see them as hubs of arts, culture, study and business, or could you not care less as long as they get you to your destination?