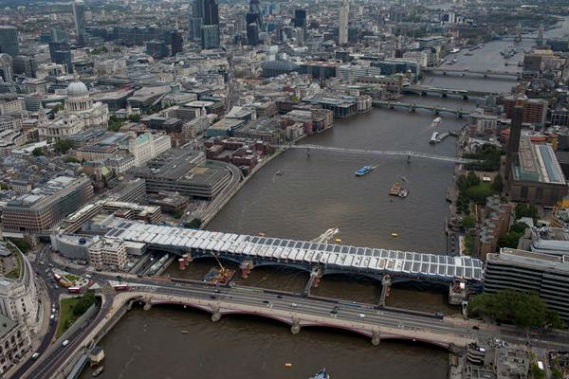 Blackfriars bridge has got a new roof- and it’s not just any roof. This roof is made up of 4,400 solar panels, and is believed to make Blackfriars bridge the largest solar bridge in the world, after knocking the Kurilpa Footbridge in Australia off the top post.

Now London’s biggest solar development, the roof is complete after four years of construction, and a cost of around £350 million. Now, that’s a lot of money and resources, so you’d expect some fairly impressive results which, according to Network rail, there should be. The clean energy produced (enough to power three hundred homes) will cover 50% of the station’s energy needs, and reduce CO2 emissions by an estimated 511 tons a year (that’s compared to 37.8 tons per year by the Kurilpa footbridge). Not too shabby.

Rain-harvesting systems and “sun pipes” (nifty little pipes that reflect the sunlight through from outside and spread all that lovely natural light around inside through “diffusers”), are also working away to further increase the station’s sustainability.

The roof rests upon Victorian foundations (the original bridge is 125 years old) and is a nice symbol of old, grand London meeting innovative green development. Although, for some, the symbolism doesn’t quite hack it; cue Kieren Long likening the south entrance to that of “a leisure centre in Slough” in the Standard last year. So, perhaps it’s not the prettiest station in the world on the inside, but the solar panels crossing the Thames are nice and shiny. And, more importantly, its prominent (and conveniently unshadowed) location means that Blackfriars station is a pretty big, impressive, shiny advert for solar energy.

Network Rail said it was too early to say whether the roof was living up to expectations, although they did concede that it was a “healthy contribution” to a greener, more sustainable London. SolarCentury, who designed and installed the panels, were rather more lyrical, claiming: “Blackfriars will be one of the World’s great solar power installations. Architecturally challenging, the project demonstrates just what is possible with this versatile technology in dense urban areas. We’ve been working amongst one of the most complex build programmes in the country, at height, over water and live train lines.”

The build programme mentioned is of course the grumble-a-plenty, unfortunately-named “Thameslink 2000” upgrade, which has seen its fair share of criticism. But with Blackfriars now providing extra commuter space and as many as 700 extra trains running per week, perhaps this is just the ticket to get Thameslink back in our good books. Potentially one of London’s most impressive, green success stories? We shall see…