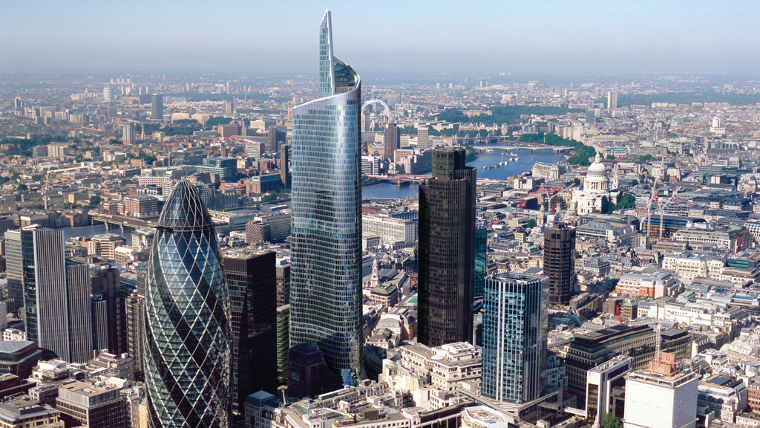 The tallest building in the City of London should be completed later this year and topped out in May at an impressive 278m. Once completed 22 Bishopsgate will house 12,000 workers, a fresh food market, a ‘wellbeing retreat and curated art walk’, and London’s highest free public viewing gallery. It will also feature the fastest lifts in Europe. As yet, however, there is no nickname, just plain old number 22.

The building that was meant to stand on this site was to be called the Pinnacle. In fact, most people refereed to it as the Helter Skelter. Construction began in 2008 but this project struggled as the financial crisis deepened and it was soon abandoned and often referred to as ‘the Stump’.

The architects for the Pinnacle were Kohn, Pederson Fox and it is the same team leading the design of the replacement building. However, the team have now set up on their own as PLP Architects. The lead designer is Karen Cook and she is now the first female architect to build a skyscraper in London. The new building is very different to the Pinnacle. As Karen Cook made clear it was back to the drawing board as it was decided that a ‘quieter’ building was required. “After all, it’s a backdrop to national monuments and listed buildings,” says Cook.

Tall buildings may still be all the rage in the City but attitudes to the style of these buildings has certainly altered. For several years there was clearly a desire for quirky designs with catchy nicknames, but no longer.

“This site has always been earmarked for one of the tallest buildings in the cluster,” says Gwyn Richards, head of design at the City of London’s planning team. “The design of 22 Bishopsgate follows our guidance for sleek simplicity, in contrast to some of the more gimmicky buildings we’ve had recently. We’re taking a slightly more disciplined approach now: no building in the cluster should be trying to shout down its neighbour.”

Nonetheless, 22 Bishopsgate is an extremely modern beast and can rightly be described as a smart building. It is one of the first buildings to have a biometric security system based on facial recognition and workers will use an app to control how much light and heat there is in their immediate surroundings. Engineers have also used technology from motorsport to prevent gusts of wind being deflected downwards on to pedestrians and cyclists. There will be a public viewing gallery on the 58th floor and for adventurous souls a climbing wall on the inside of the glass at around 400 feet.

This huge building is not to everyone’s taste, but the developers have now leased about half of the total space of 1.4m sq ft and they will surely be delighted that Apple has just agreed to lease around 100,000 sq ft. Many considered it very risky to steam ahead with developing such a large building during the Brexit process but so far so good as the City continues to reach for the skies.

To have a great look at the newest buildings in the City of London please do join Insider London for a Modern Architecture tour of London.