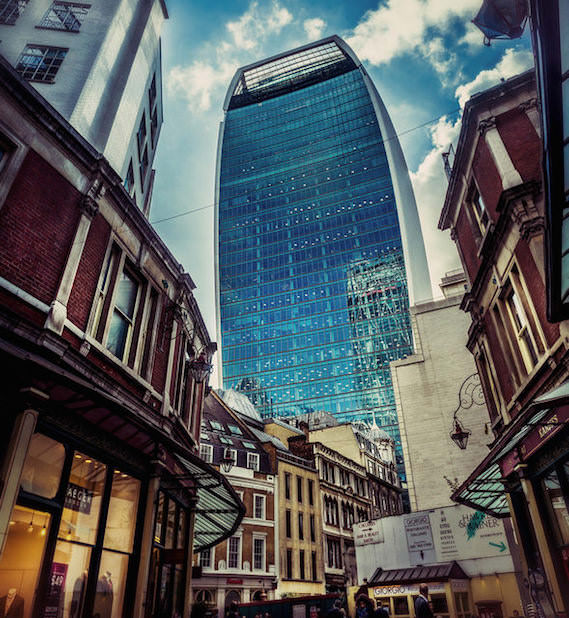 20 Fenchurch  Street, also known as the Walkie-Talkie tower for its distinctive top heavy shape, is possibly one the more contentious tall buildings of recent times. It bulges out of the heart of historic London, to some literally sticking out like a sore thumb. Designed by Uruguayan architect Rafael Viñoly it has certainly left an indelible mark on London’s urban fabric for better or worse.

A giant bush in the sky. Image Credit: Dave Pearce

At the top of the tower is the sky garden, set over floors 35, 36  and 37, offering uninterrupted views across London, completely free to the public to frolic and roam around. The catch? Due to a high number of expected visitors bookings are encouraged be made far in advance.

The skygarden was a requirement of the planning application but the final result is substantially altered from what was previously planned (read more about reactions to the opening here). If you’re expecting Kew Gardens you’ll be sorely disappointed, but if you like dining at a height then you have three restaurants to choose from.

2. The Building with More Up Top 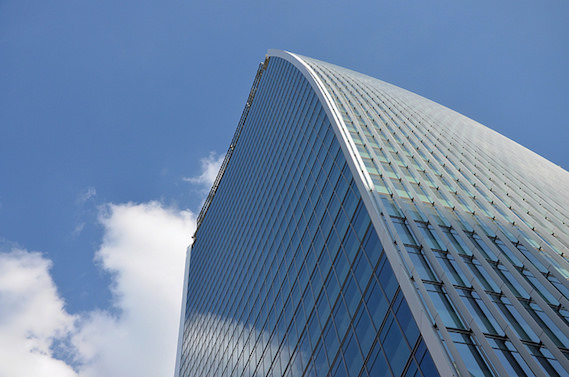 While under construction, the tower was advertised as “The Building With More Up Top”.  It certainly does burst out and above the rooftops of traditional London, with wider upper floors that give it a distinctive top-heavy appearance, designed to increase office space and exploit rents and views, rather than for aesthetic reasons.

3. It Replaced Another, Albeit Smaller Tower 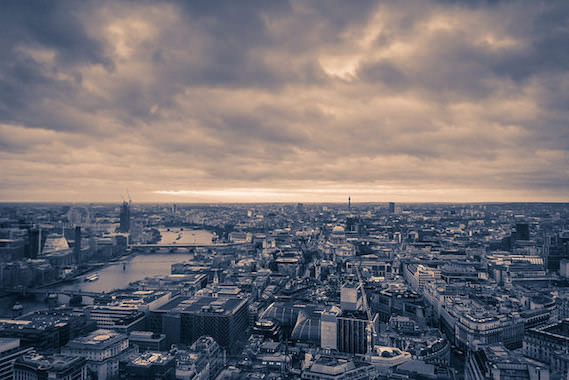 Although often seen as being out of place in London, 20 Fenchurch Street replaced an earlier tower on the same site. Designed by architect William. H. Rogers and built by Land Securities in 1968, it was occupied by Dresdner Kleinwort and was notable for its distinctive roof and for being one of the first in a wave of tall buildings in the 1960s. At 99 metres tall, it was significantly shorter than today’s building.

4. It Was Reduced In Height 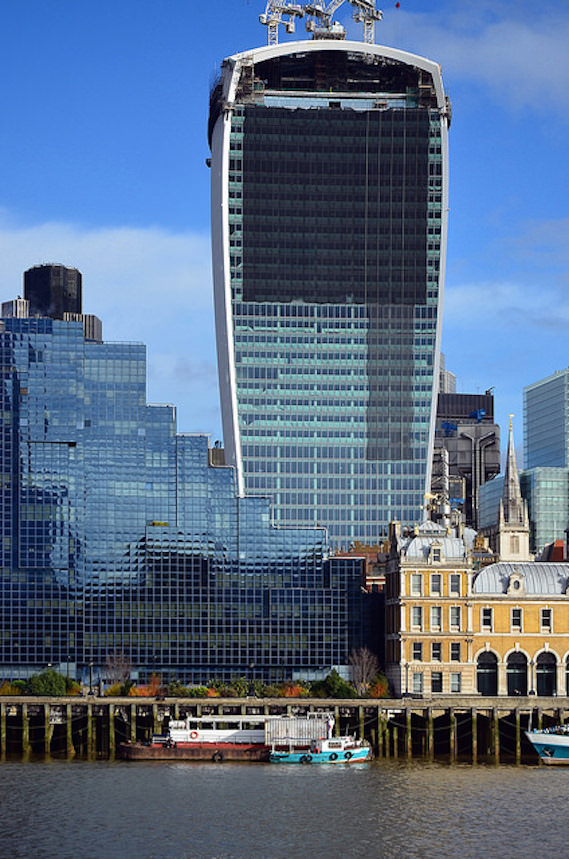 The original proposal was deemed too tall for its location. Image Credit: George Rex

It was originally proposed in 2005 at 220 metres high, to be one of the tallest buildings in The City, but after concerns about its impact on St Paul’s Cathedral it was reduced in height in 2006, giving it the signature stumpy look we’re left with.

5. It Almost Never Went Ahead 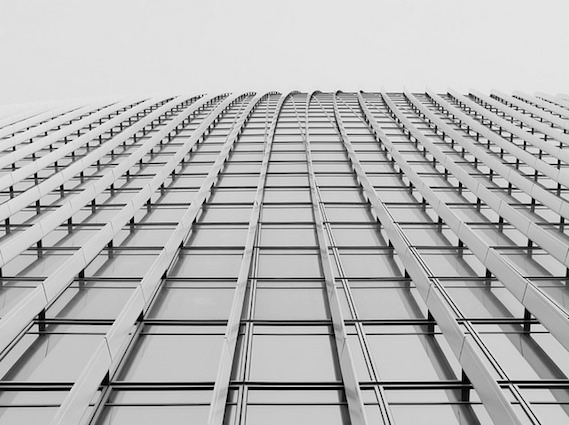 The Walkie Talkie was meant to have been finished by 2011, but like many other projects during the Great Recession it was almost killed off. It took a takeover by Canary Wharf and another three years to complete the building.

6. It Was Bought By The Canary Wharf Group 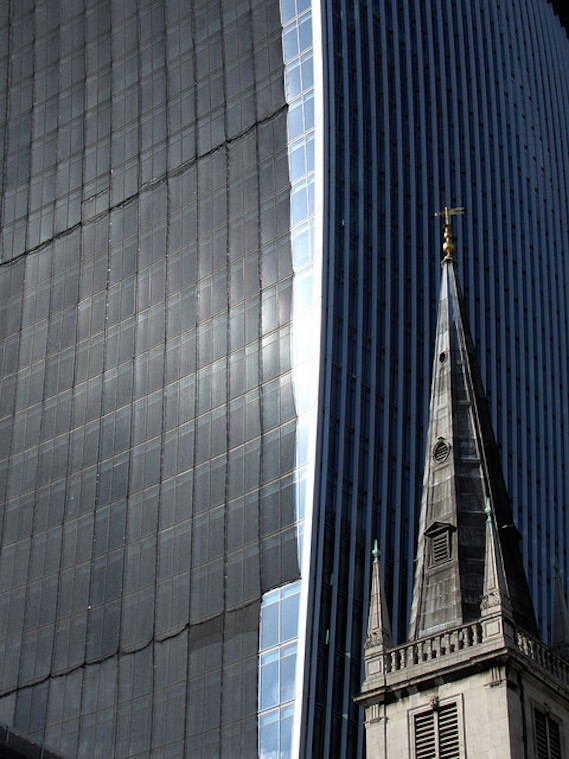 20 Fenchurch Street marked Canary Wharf Group’s first foray into development in The City of London, outside of its Isle of Dogs stomping ground. The Walkie Talkie was developed alongside Land Securities and backed by sovereign wealth from China and Qatar. Together they saved the building from its credit crunch doldrums, but substantially altered the development, simplifying the complex cladding and making the sky gardens more of a glorified bush in the sky. 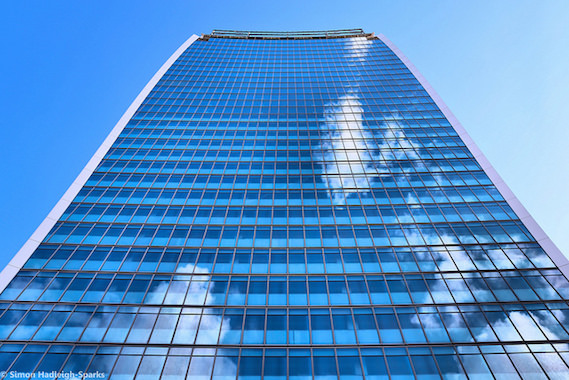 On sunny days like above 20 Fenchurch Street gave off a “death ray” solar glare. Image Credit: Simon & His Camera

In a now infamous episode we dub “scorchgate”, a particularly sunny summers day saw solar glare from the building melt part of a Jaguar, causing the tower to become a laughing stock and for Londoners in typical irreverent fashion to flock to the Walkie Scorchie’s sun spot to catch some rays and fry eggs. Two things that go together like a house on fire! (For more architectural mishaps, check out our post on what happens when London buildings go wrong.)

8. Following “Scorchgate” Emergency Changes Were Implemented to the Design 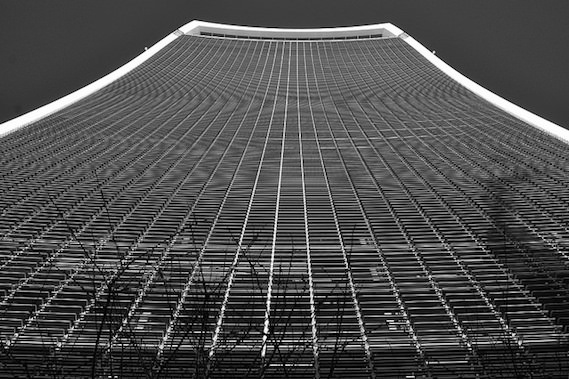 The original design incorporated brise-soleil (sun louvres) to tackle solar glare from the convex glass facade. These was dropped during simplification of the cladding. To solve the problems of glare, a Californian specialist was brought in to add brise-soleil to the façade of the tower. Interestingly, the specialist was appointed after solving similar issues at the Vdara Hotel in Las Vegas. Viñoly designed that tower too.

9. The Architect Distanced Himself From The Project 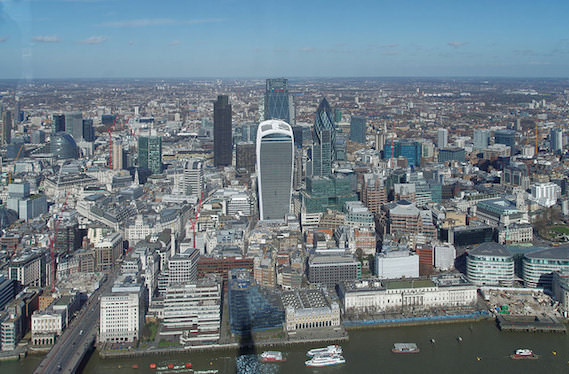 After seeing his work shortened, simplified and rejigged last minute-who could forget the good old “scorchgate” episode-its architect, Rafael Vinoly distanced himself from the tower., stating “My name is on it but it’s not my building.”

10. Office Workers are Crammed in

The building has an occupational density of 1 person per 8 sq metres. The recommended density for offices is 1 person per 10 sq metre, which means that the Walkie talkie really is the building with more up top!

Want to know more about London’s tall towers? We’ve got more facts about The Gherkin and Tower 42. And for even more, come and join us on one of our Modern Architecture walking tours.